What’s New In SpriteKit on iOS 10: A Look At Tile Maps

Learn how to use Tile Maps in SpriteKit on iOS 10.

I can’t wait to go through this and then go through Ray’s Platformer book again with XCodes new tilemap. It’ll make things so much more streamlined.

Applaud for WWDC and Apple on this one.

It’s probably worth noting that in the Assets collection that the set folder must NOT have Provide Namespaces checked. And I think it can’t have spaces in the words of each Image set inside it. Otherwise you will get heap errors from malloc not knowing where the asset is.
And in Xcode Version 8.0 beta (8S128d) anyways, a generous use of Product -> Clean.

@demzpaul - Thanks for pointing these out.

From what I can tell the Tile Map don’t work on devices right now (at least 32bit, haven’t tried my 64bit devices yet). I was working on my own project which was working fine in the simulator but would consistently crash when attempting to run the map on the device. I decided to try using this sample project on my device and it immediately crashed with the same error.
In both cases the error is:
[NSKeyedUnarchiver decodeInt32ForKey:]: value (9223372036854775807) for key (_defaultTileGroupIndex) too large to fit in 32-bit integer’
I may be missing something but hopefully this is fixed in the next beta…

While developing Rubber Duckie Rescue, I was running it on my iPhone 6s running iOS 10 and it worked fine. Much better than in the simulator. The simulator can’t run at 60 fps.

[I assume you’ve updated your device to iOS 10 to be able to run the tile maps. (Caution - only update devices which you don’t mind if they get stuffed up.)]

Yep, I’ve noticed that the simulator doesn’t work well which is why I was trying to get it running on the iPhone 5 I have as a secondary phone. I’ll try installing it on a newer device and see what happens. Thanks for letting me know it works on your iPhone 6s that does make narrow down the list of possible points of failure.

this is awesome and exactly what i was looking for after watching the WWDC session! love it. I built and run on an iPod Touch 6th gen I got just for doing iOS10 dev messing like this !

anyway works great, love the tutorial, interesting way of doing things and really like the tile map stuff… i never planned a game using tile maps, but now i am inspired to come up with something !!

one thing - there are some tiny gaps around the grass edges when i run on the iPod. must be a single pixel off somewhere in the asset graphics?

thanks for this great tutorial !

just wondering - is there a best practice for the pixel size of the graphics assets used in tiles ?

also - if the map is bigger than the viewable area on screen - how best to scroll ?

I don’t know why there would be a pixel gap around the edges. There isn’t one on the 6s. I don’t really want to upgrade my other devices at this time, so I can’t check, but I’d be really interested to know what’s going on. It may be fixed in future betas.

The SKTileMapNode is a subclass of SKNode, so you can move it around just as you can any SKNode. 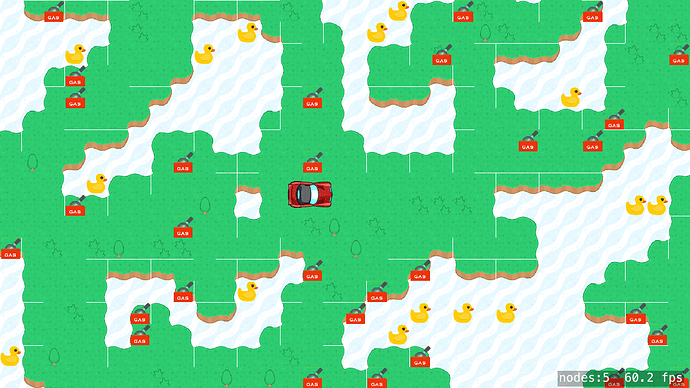 here is how it looks on my iPod Touch.

I’ll check if i did something wrong with an offset or position or something ! if not, then it must be an Xcode bug i guess. it doesn’t look like that in the simulator. 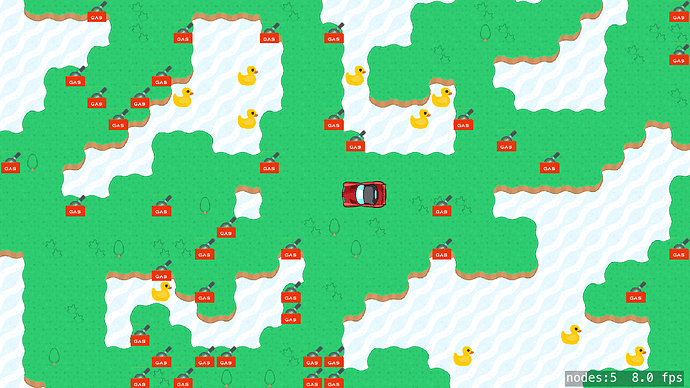 i filed a bug report as i couldn’t see anything in the code or tile maps that would make the pixel gap happen !
27074864

There is a bit of consistency in the breaks, but perhaps I’m seeing patterns where none exist. In any case, as it works on my iPhone 6s, I think it’s a bug

This is definitely my favorite part of this WWDC

Finally, we can make games “nearly” as easily as with RPG Maker from 20 years ago (my first experience making a game as a kid, was to remake Pokemon Green on PC with colors, mp3 musics and much better attack effects

It would be really nice also if we had a small community sharing some higher quality tilemaps (especially that it supports animations now).

BTW, anyone knows TilemapKit? … As much as I was happy during the presentation at WWDC, I had some strange after taste, did Apple “plagiarize” TilemapKit, or possible bought it?
Really strange that besides animated tiles, they did a perfect carbon copy of TilemapKit

I’ve been experimenting with this myself. And have a couple of questions I hope someone can help me with:

Thanks!
Self-facepalm on the physics-bodies on the SKTileMapNode bit. I was too focused on the rows and columns to think about the fact that these were obviously available directly as well. (A nice little “can’t see the forest…”-moment).

I was thinking in regards to the dropdown-menus actually, hoping that something akin to SKInspectable, IBDesignable would allow me to access my own enums from the editor. Matching the integers with the enum-rawValues might be a decent work around though, so thanks again!