SQLite With Swift Tutorial: Getting Started

In this SQLite with swift tutorial, learn how to utilise the SQLite database with your Swift projects, including inserting, updating and deleting rows.

This is a companion discussion topic for the original entry at https://www.raywenderlich.com/385-sqlite-with-swift-tutorial-getting-started
delmarsh September 26, 2017, 2:34am #2

Hello I am using Xcode 8.2.1 swift 3.0 I am trying to learn to use SQLite by taking this tutorial.
I know SQLIte is on my Mac since I can use it in the terminal window to create tables.
However I want to follow this Tutorial and my Xcode says
Playground execution failed: error: The C API.xcplaygroundpage:24:8: error: no such module ‘SQLite3’
import SQLite3

Cant even try to Import SQLite into old Project, didn’t let me.

How do I get Xcode to Import SQLite?

you need to use Xcode 9 for this tutorial. Also, I believe on older Xcode versions you actually need to import import SQL instead of import SQLite3.

Hello! How can I call insert method in ViewController class?

how should i go about creating a cross platform database app. I’m planning to create an inventory app which mostly will be accessed on Mac but sometime via windows too? (iOS not required.)

If not then atleast on Mac again iOS not required.

Thanks very much for your questions! I believe the problem you’re running into is because you have not imported the correct framework into your project in Xcode. If you go into “Build Phases”, and then select “Link Binary with Libraries”, you will find the options to include the SQLite frameworks into your project as shown in the following screenshot: 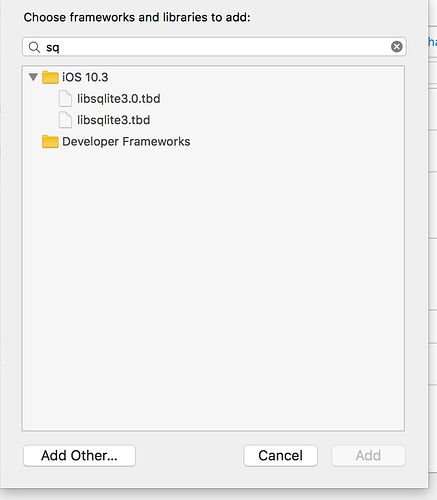 Once you have imported the framework into your project, you should be able to import the necessary library in your relevant ViewControllers

I hope this helps!