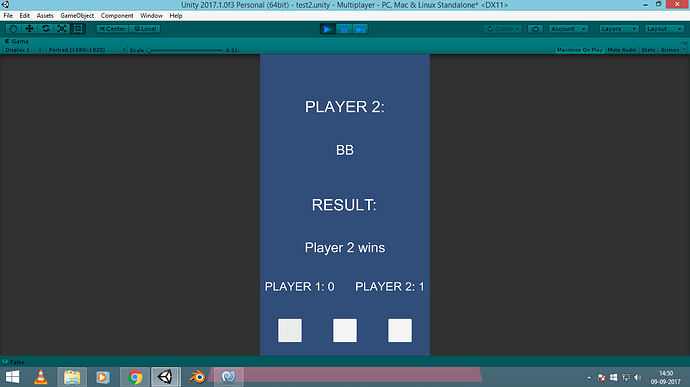 In the screenshot, it shows a simple game. in this game P1 is the user and P2 acts like a bot. P1 has the option to choose 3 buttons at the bottom and when he selects any one of those, it is compared with P2’s choice(P2’s option is chosen automatically in the script using Random()).So as of now its like playing with CPU opponent and not with a real player. So i wanted to make this a multiplayer, where the opponent will choose one of the options and player will also choose and a winner will be decided based on a logic. I have gone through the UNET docs, completed the multiplayer sample its connecting well and fine. I tested it on the two phones and its working too. So can anyone help me in creating this multiplayer in unity? It would be really helpful

. The network connectivity I’m prefering is just local Wifi hotspot and not internet.

Hey @degeta10! Sounds like you’re most the way there already if you have unet up and running! I’m no expert here but have you checked out the tutorials that Unity provide? They have quite a lot on Multiplayer Networking, you can find them here: https://unity3d.com/learn/tutorials/topics/multiplayer-networking

Look forward to seeing how you get on

Yeah but theres a lot of stuff in the docs and i dont know what to focus on. I mean i need some direction thats it! So i was just hoping if someone would guide me

Ahh, my knowledge doesn’t go any further than that i’m afraid

Hopefully somebody else might be able to help though!