Introduction to Unity: Getting Started – Part 2/2

In this second part of the Introduction to Unity tutorial you'll learn: "How to use the Project window to import and organize your assets", "The difference between GameObjects and Prefabs", "How physics work in Unity", "How cameras work and which types of projections are available" and "The basics of Materials in Unity".

This is a companion discussion topic for the original entry at https://www.raywenderlich.com/770-introduction-to-unity-getting-started-part-2-2
haolejon February 5, 2017, 1:13am #2

I did the 2016 version of the tutorial and had a problem. Then I saw this updated version and tried it, but I’m having the same problems.

When the game starts, the asteroids don’t always generate on the same plane, so eventually I get 5 asteroids floating around, and they can’t be destroyed. This doesn’t happen to all of them, however, some are able to be shot.

I am getting this error, which I think is related: “UnassignedReferenceException: The variable screenDebris of GameManager has not been assigned.
You probably need to assign the screenDebris variable of the GameManager script in the inspector.
GameManager.Update () (at Assets/Scripts/GameManager.cs:31)”

Also, when I build the game and run it, there is no way to escape from the game back to the computer. I have to re-start the computer.

Thank you for taking the time to have another crack at the updated tutorial! Let’s see if we can help get to the bottom of what’s going wrong.

Please let me know how you get on with these suggestions… if you have any other difficulties, please do no hesitate to reach out.

Thanks for the quick response. I went over what you suggested and here is what I came up with.

I’m not sure why it is different, but when I select the objects the in the prefab folder, the Ship is Z: 10, the Asteroid is Z: 12.5976, and the bullet (which I noticed is also on the wrong plane) is Z: 10.423. I ran the game, and the ship Z is still 10, but the asteroids are all at Z: 0, although visually, they are on different planes (although only slightly, and the rotation of some is Z: -180) and the bullet Z is 10 (Same as the ship, but visually it is off). The Sphere Collider component is in the Asteroid object, and the Z axis all says, 0. Yet this doesn’t explain why some asteroids get shot and some don’t (also, the ship runs into some asteroids and some it passes through). So I’ve done something wrong somewhere, but I’m not sure where. I’ve included a screenshot of looking down on the scene to show visually where everything is.

Looking at the sphere colliders also, the ship’s is set to Z: -0.72, the bullet is set to Z: 0, and the asteroid is Z: 0.89. I’ve verified the required inputs on the asteroid are the same, although the Z axis in Transform -> Position is different. So I think there is an error there as well.

I’m rehashing the steps I think are were I made a mistake, but I’m still getting the same results. Maybe need to start from scratch.

I’m finding it difficult working on this on my little laptop, I’m going to try to export the project to my iMac, where I have more space to work, and verify everything again. Or I will build the game again tonight (japan time) and see if I can find the error.

Thanks again, I’ll keep working it. 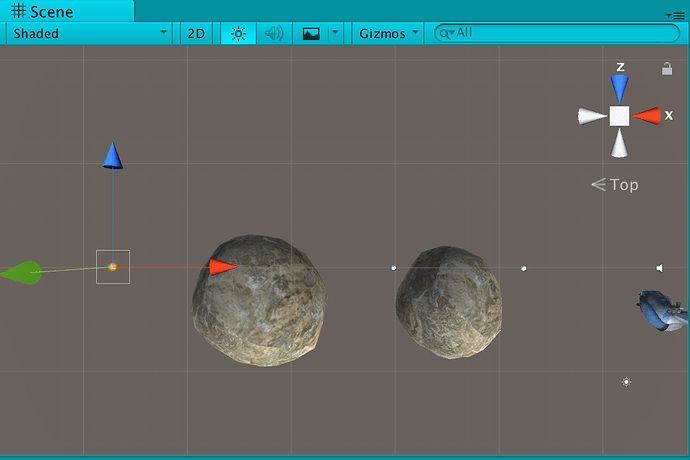 Hi Again,
Thank you for the information.
Two nuggets of info to help us understand the values you are seeing in your game:

Keeping these things in mind… there are two things I think you should check to help you troubleshoot your game.

Hi Haole,
Thank you for persisting with this.

Please have a look at your Asteroid prefab in the Prefabs folder. Click the disclosure arrow beside it to reveal rockLP001. This is the Game Object that contains the asteroid’s mesh renderer, and as you will see, it has a transform or it’s own. Please make sure this transform is set to 0, 0, 0 for both the position and rotation and 1, 1, 1 for the scale. Any alteration to these values will offset the rendered asteroid from the Collider.

Let me know how you get on!

I had an issue with a part of the script when shooting a bullet, I wasn’t able to actually spam the button. The moment I pushed the spacebar button to shoot a projectile my spaceship was actually disappearing until the bullet flew off screen which was extremely confusing, not to mention the bullet never actually got destroyed. After scowering through the codes I found a fix by making a new variable in the bullet script and adding an update() function to replace the onBecameInvisible() function

Hope this helps anyone who was having the same issue as me!

I am a beginner and I had to set the depth of Camera to not less than 0 to see the Game preview correctly because the default value was set to -1.

This tutorial is more than six months old, so questions regarding it are no longer supported for the moment. We will update it as soon as possible. Thank you! :]