How To Make a Custom Control Tutorial: A Reusable Knob

This is a companion discussion topic for the original entry at https://www.raywenderlich.com/2092-how-to-make-a-custom-control-tutorial-a-reusable-knob
prefpkg March 29, 2016, 10:28pm #2

First off, This is great! I learned so much about what is going on behind the scenes. I was wondering if we wanted to make adjustments on the fly in Interface Builder, could we bring the drawing code in from the renderer and make it @IBInspectable? My guess is the CALayer does not appear in the preview? Would I lose any performance? Thanks!

I’m happy to see you liked the tutorial!

You should be able to easily make the view @IBDesignable and the relevant properties @IBInspectable. CALayer does indeed appear in the previews in Interface Builder.

The feature is sadly still a bit buggy at times though. So expect a few hiccups here an there while Interface Builder is trying to show a live preview.

You shouldn’t lose any performance. @IBDesignable and @IBInspectable shouldn’t have any effect on the final app.

Thanks for this great tutorial.Can i get some solution for the following problems which i am facing.

Sir i need little Help.
My output is kinda different where you have mentioned that “Build and run your app, and your control should look like the one below:”
I am getting different output. I have attached my output screenshot. As if you can see there is only a tiny little dot instead of a knob. 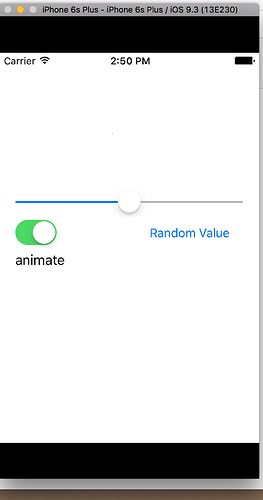 Great tutorial!
I have some questions:

Can you explain the handleRotation: method its like many parameters ? Any ways to simplify it.?