Learn how to quickly build a real-time chat-enabled iOS app, written in Swift, that looks and behaves just like Messages with this Firebase tutorial.

This is a companion discussion topic for the original entry at https://www.raywenderlich.com/878-firebase-tutorial-real-time-chat
nathanielb October 31, 2016, 5:09pm #2

Great tutorial! I have been working on a Firebase messaging app for the past few weeks and it’s nice to see some signs that I’ve been going about it correctly.
I’m wondering if you have any advice as to how to structure the json models for a one-to-one messaging? I want to try and avoid as much data duplication as possible but at the same time I’m unsure how I can go about filtering conversations that include the current user as a sender OR recipient using the FIRQuery…
Especially when a quick check of some sort is needed to see if a conversation with another user already exists or if a new one should be created.
Thoughts? I’m stumped!

I have also considered the following structure:

Was this even proofread before posting it… The starter project file podfile is set up for iOS 10. The podfile code snippet we needed to copy does not have an ‘end’ at the end.

There is no file ChannelViewController… Unless you meant ChannelViewListController… I really wanted to use this tutorial but its abundantly clear that no effort has gone into it.

Starter Project has some issues that are easily converted by Swift auto correct.
The three that are not handled are as follows:
In file UIImage_Gif.swift

The unsafeAddress has been deprecated. Removed in Swift 3. Use Unmanaged.passUnretained(x).toOpaque() instead.

Full changes should be below:

Your mileage may vary

To answer your specific questions

As an aside, can I suggest you tone down the attitude a bit. You’ve made a couple of good points in your comments (alongside a couple of duds), but your tone makes it significantly less likely that people will want to engage with you. This can only be a net negative to the community. Thanks :]

Thanks @jamiedaniel, I’ll check that out.

What version of Xcode are you using out of interest?

Hi, Great Tutorial!!
can i install firebase without using cocoapods?
for your opinion, when should i use use firebase over cloudkit?
many thanks,
ohad

@domino1 for me it’s a question of philosophy rather than technology.

CloudKit is designed for really easy, seamless integration with iOS apps. I can’t see Apple pulling the plug on it any time soon and without a really easy upgrade path for developers. And whilst there’s a JS SDK, I don’t feel it’s given as much priority for Apple, and doesn’t integrate well with Android.

Firebase, on the other hand, has supported SDKs for lots of different platforms. But it’s 3rd party to Apple and who knows what Google plan to do with it in the future.

So do you value iOS simplicity & compatibility over multiple OS support?

Personally I’d go for Firebase unless I was 100% confident I was never going to build an Android version of my app.

Hey everyone,
Could you happen to make an android version of this tutorial? I think this would be a great cross platform app, since this is using Firebase. By the way, great tutorial!!!

hello
this is a great tutorial can you advise how to use a blocking mechanism. I really need to add this method its soo important. Thank you

@mmasri you can use User Based Security. In the example in that document they define a rule that a message can be created by a member of the room, like this:

You could do something similar by having a list of blocked users on your thread/channel and block both read and write access if they current user ID is contained in that list.

@nathanielb I’d probably just use security to prevent other people from joining the thread once it’s created between the two people, and then limit the reads and writes to members of the thread

And as for finding the thread, create an id that’s something really simple like this:

Store that on the thread somewhere. Then use a validation rule (https://firebase.google.com/docs/reference/security/database/#validate) to make sure the thread doesn’t exist when you try and create one.

If the validation fails, you know you can query for it!

I apologize if this has been answered before in the past.

I have always wanted to create a chat application and this seems like it is a great step in the right direction. The one thing you mentioned on where to go from here is having users.

I am more or less just starting out and these tutorials are fantastic but sometimes the core references from the devs are far more than I can understand. Not to say I haven’t tried, but I do struggle excessively with it.

Short and sweet is are there any other resources out there that best described how users can add themselves (signup) and search for other users and have 1 on 1 chats?

Thank you for your time and great tutorials!

How to delete channels and messages? as admin and user

the app crashes when i try to add picures.

Really great tutorial!
Since I completed the “Firebase / Get started” tutorial, I was eager to learn more about Firebase.
And especially the instant messaging functionality.

Your tutorial is so much more instructive than Firebase samples. But hey, that’s why Ray wenderlich is the best friend of any iOS dev

One last thing to do before photos will work on a device: Add an NSCameraUsageDescription to the Info.plist.
https://developer.apple.com/library/prerelease/content/documentation/General/Reference/InfoPlistKeyReference/Articles/CocoaKeys.html#//apple_ref/doc/uid/TP40009251-SW24

Thanks for the tutorial - a good thorough start. On a real device, I’ve noticed a few things when using the photo attachment capability (after adding the privacy - camera usage item to the info.plist:

Many of these may be a matter of further knowledge on my part of JSQMessagesViewController, but any enlightenment or direction would help.

I am a very novice developper and tried to follow that tutorial from as close as possible.
I have installed pods, configured Firebase but XCode Build fails.

I have deleted the full project and started from scratch 2 times by following the tuto from close but still same result.

Any idea of what I could be missing?
Really looking forward to use that tuto up to the end :] 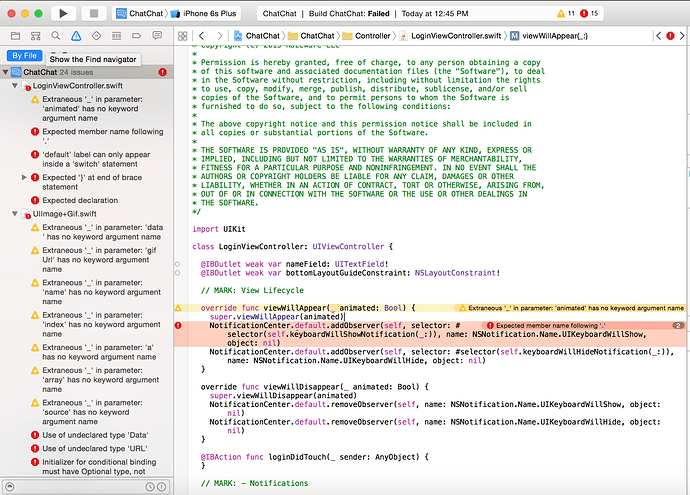