This line of code is actually quite dangerous:
let albums = PHCollectionList.fetchTopLevelUserCollections(with: nil) as? PHFetchResult<PHAssetCollection>

For my part, the code don’t work, I run the application, the interface loads, I am asked to get access to the library, I agree, and then the photos are not displayed.
Here is the error returned :
[core] “Error returned from daemon: Error Domain=com.apple.accounts Code=7 “(null)”” 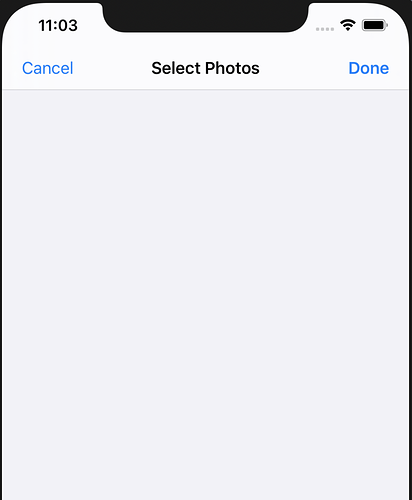 I downloaded the project, I unzipped it, then opened the project in ‘End’, it build without errors or warnings, and then the app on the simulator or on a real device, doesn’t show any photos.

The error :
[core] “Error returned from daemon: Error Domain=com.apple.accounts Code=7 “(null)””
is displayed when this line of code (74) is called :

What are your Xcode and iOS versions?

And what’s the photo album configuration on your simulator? For example, are the photo items in various photo albums? Are they stored on the cloud? etc

Xcode 11.5 (11E608c)
iOS 13.5 (simulator and device), I tried also 12.1 in simulator (same pb)
Devices in simulator are brand new simulators, no extra configuration. All photos are in one album.
Real device has various albums and a part is on iCloud.

On simulator, ‘My Albums’ seem to be empty, but there are photos in ‘My Camera Roll’ album if iIclick on ‘See All’. 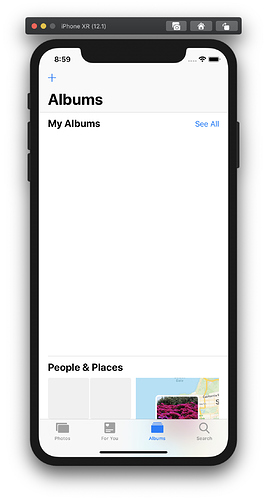 Thanks for your help Lyndsey

@lyndsey Can you please help with this when you get a chance? Thank you - much appreciated! :]

@freddyf Thank you for sharing this - much appreciated!