After I import BobbleheadWars.unitypackage and started to drag “Bobble Arena” to Scene, it’s not successful. The icon shows complete white: 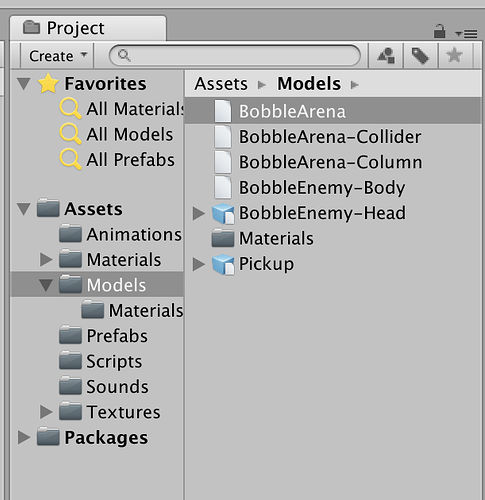 Do you have blender installed on your system? It’s required for this version of the book. In future versions, we’ll remove it, but for now, you need it.

I have the same problem. Blender has been installed on my iMac with latest OSX.
Very frustrating: feels like I can’t even get passed “hello world”.

Can you please update the material? The book is quit useless for me as it is. It seems that the latest version of Unity will not accept the assets properly. Even the final project will not load OK.
Please help! It feels like the start of a journey but I even can’t find the key of my front door!

Thanks for the heads up - 2018.3 may have causes some issues. I’ll go through the chapters again and see what I can find. What kind of errors are you experiencing when the projects don’t load?

The Bobble Arena stuf stays “blank”. I messed around with it and at some point I got an error like “Blender can’t convert …” I also have the newest version of Blender by the way.

I am having the exact same problem, very frustrating since the book is based on the assets, and the assets aren’t loading or there is some kind of problem. Would it be better to use an archived version of Unity versus current edition? Which unity version should we use???

Having the exact same problem. Have you consider using an older version of Unity? I realize that’s not a good solution. Not sure if good idea to base book on assets that aren’t keeping up with Unity. Perhaps advice is to use earlier version and not due any updates until you finish the book.

It simply won’t load into the scene. There appears a CIRCLE WITH LINE THROUGH IT icon appears and flickers if you attempt to follow the book’s instruction. There is no official error message though. Item will simply not load. It appears there is some problem with Unity recognizing the file type??? As file icon itself is blank as shown in the screen shot.

For anyone having issues with loading assets, make sure you’re using Unity 2018.2 and have Blender 2.79 installed by using the Blender installer on this page. The Steam and beta versions of Blender won’t work correctly with Unity.

Like with our tutorials, we need to update all text, screenshots and projects and test if it all works correctly when a new version of Unity is released before we can publish a new version of the book, and this can take some time. Unity 2018.3 in particular will take a bit longer as the prefab system had a full overhaul, causing all of our previous prefab-related instructions and screenshots to break.

Thanks for your understanding.

Never mind; I just ended up installing a previous version of Blender, then right clicked and selected Reimport, and now it works.

REimport alone might have done it, but didn’t have the time yet to uninstall and try again.

@karma17 Do you still have issues with this?

Never got it to work. Do not want to install previous versions, Just waiting for update book while doing other stuff…

Unity comes with Unity Hub which is now the default way to open Unity. Unity Hub allows you to install multiple versions of Unity with a simple click of the mouse. It also allows you to open projects in different versions including betas.

I understand that you may not want to install older versions of Unity, but Unity goes out of its way to make it a painless process for just this reason.