The tutorial went great until I got to the “Fixing up the tables views" topic on page 258. After implementing the awakeFromNib() method in LocationCell.swift file (specifically “descriptionLabel.textColor = UIColor.white” and the next 3 code entries concerning the appearance of the actual cells, the app crashes when run. The error message reads as follows:

I have checked the code entry several times and have passed the code from the source code provide. Is this a code problem or do I have something wrong in the Storyboard?

Thanks to anyone for your help.

That error message isn’t really very informative. There usually is another message inside the Xcode debug pane at the bottom. Can you share a screenshot of your Xcode window when this crash happens?

Here is the screen shot in Xcode when app crashes. When I first run the app, the Tag and Map tabs work fine, but when I tap the Locations tab 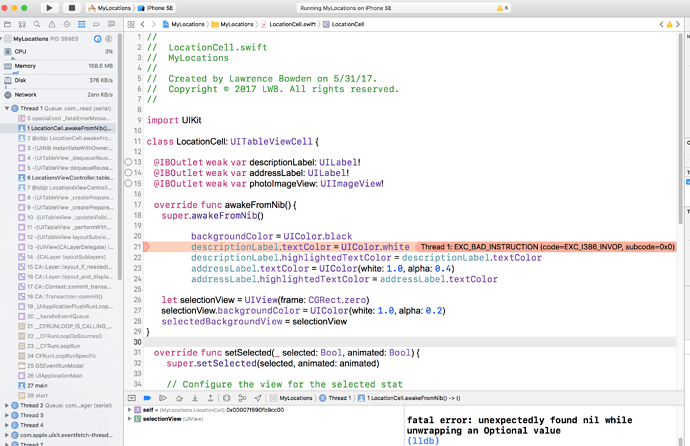 This is the first time that have entered the forums, so I may not have done it right. Hope you get this and thanks for your help.

It looks like the descriptionLabel outlet is not connected to anything on the storyboard. (Neither are addressLabel and photoImageView.)

The outlets seem to be connected. In the Storyboard connections inspector, both labels and the photImageView are all connected to LocationCell under Referencing Outlets. Also, when I comment out the labels color setting as shown in the screen shot, the app runs OK and the Locations screen comes up fine. 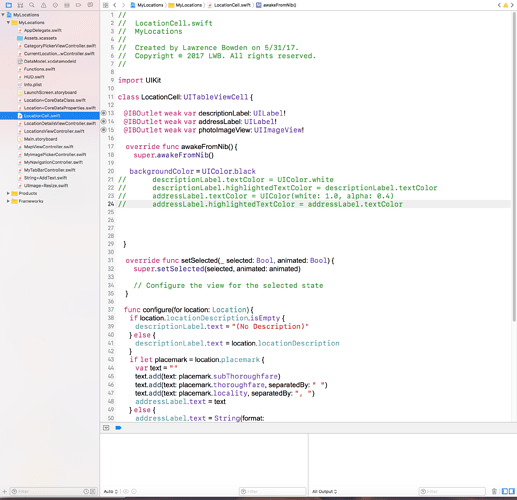 As noted in my last post, I thought I had the outlets connected. As I investigated further, I found that there was a section called “Outlets” under the Locations Screen Content View Connections inspector that was not present in your source code. When I connected these, things seem to be working fine. I don’t understand what happened, but at least I seem to be on track again. Thanks so much for your help. I will try to attach the screen shot of the connection inspector after I connected the outlets. 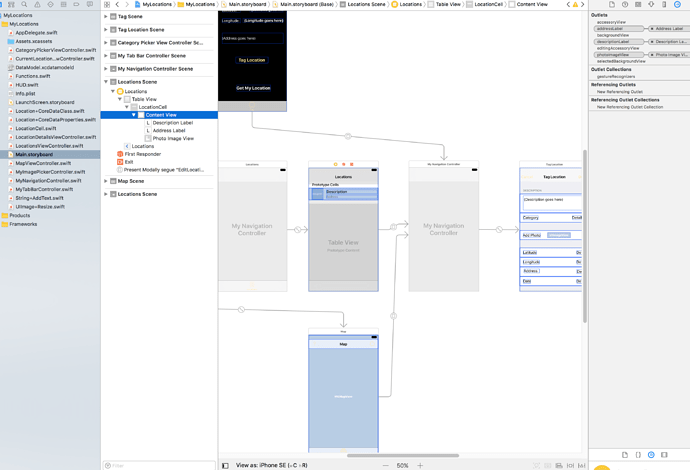