Adding this in case anyone else has had similar issues…

Following the instructions in the 8th edition of iOS Apprentice, chapter 11, page 364, I used “refactor” to rename the ContentView to ChecklistView.

After renaming things manually, all seems to be working. But I wonder if the refactor tool in XCode doesn’t really work as expected.

I went thru that chapter today and did the same refactoring thing… Other than it not renaming the comment one (Which was noted in the book), everything worked fine for me…

I know that @jamesh has already tried the refactor exercise and it worked, but I’ll do it later today and see if I ran into the same problem you did.

I have it a try and didn’t encounter any of the problems you had with refactoring. I’ll give it another try this weekend on a different machine, just in case there’s something unusual with the setup on my primary development Mac.

Thanks @accordionguy and @jamesh.

I’m up to the second refactor task, and I think I see where my Xcode environment is behaving differently than what’s shown in the book…

When I do a refactor, it only seems to show results for the current file, even though “All” is selected. (And “All” in my view is “4,” rather than the “7” in the example.)

Here’s what I see when I do refactor:

As opposed to the book, which shows that refactor should be searching across all files: 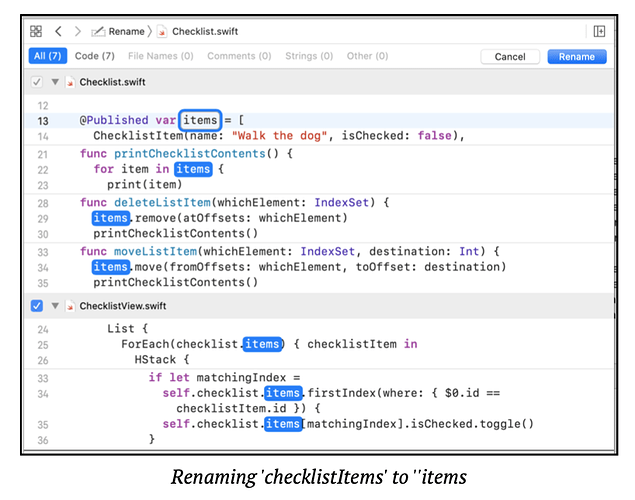 Any ideas why I might be seeing a different behavior? It’s as if refactor isn’t “aware” of the other files.

Same thing happen to me today. I refactor the ContentView.swift file and the file icon become blurred out. When I clicked on file the system sound (sound when something is unavailable) heard and file content didn’t show up in editor.

I quit Xcode and opened it again, then trying to rename ContentView.swift file back to ChecklistView.swift file and everything worked as aspected. I can’t reproduce this bug so I can’t really give the exact error.

Hope to help someone with same issue.

@oaklazza Do you still have issues with this?

I ran into the same problem- refactoring broke my app. However, the fix was fairly simple-- Finder showed that my ContentView.swift file in the app folder had not been renamed. By Control-clicking on that file in Finder, I was able to rename the file to ChecklistView.swift and everything seems to be working.