Can you share the code of what’s in your PropertyFinder file?

I assume you’re putting the logic to pass the relevant cell info in _onPressItem. If so, you could rely on this.props.listings and index into the this to get the right cell data and pass this as props to the navigator.

Note: you just need to pass one listing.

Hi Cabernathy! thank for replying, It is my bad. I’ve maked a wrong syntax for render function of SearchPage class. I fixed it and everything works fine now. One more thing is when I try to run your complete project, it raises the error also and run upgrade command will fix it.

That’s good to know. What error did you see when you ran the final project?

Thank you for the awesome tutorial!

I started this in android a couple of days ago, and got stumped when I got back today why this.props.navigator.push was throwing an error. I forgot that was an IOS only feature.

How would you change this for android so it would display similarly?

You could use React Navigation which is cross-platform. You can find more info about it in these docs.

Great tutorial. Kind of got stuck though. Hopefully someone can help me? 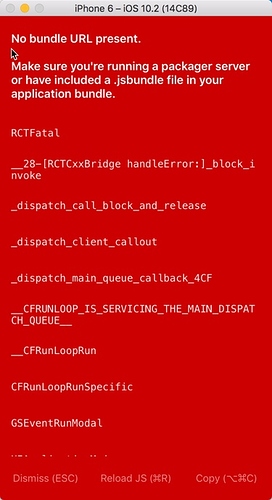 I tried the suggestions before, im still running into the issue for RCTBundleURLProvider that was mentioned above.

I’m wondering if the React packager is running. Can you try running:

In Terminal, then running the app from Xcode to see if this “red box” goes away?

I have tried, it didn’t work

I’m only interested in developing android apps using React Native.
Can I use this tutorial to create android apps or is it only for iOS only?

Here is how I built my own Android app in React Native and also published it on Google Play.
All within 2 day!

Thank you for the great tutorial, in fact best one I have seen so far. It is sad that it does not cover Android as well. I find it to be an issue with most tutorials in RN, they only touch IOS, at least the tutorials that are good as this one. I with Facebook would improve their documentation and provide better tutorial instead of that HelloWorld one they have.

I have to say, I really enjoy RN and I like tooling but I have run into numerous problems myself while I was researching how to bring this technology to companies and suggest it as a platform for their future apps. I have posted them here https://stackoverflow.com/questions/45909260/react-native-cross-platform-example-write-once-and-use-anywhere-or-dry/46027616#46027616

Any follow ups? @cabernathy I am stuck on this tutorial otherwise

Could you share the output from running the command?

This tutorial only covers iOS. There seems to be demand on creating an Android-specific tutorial. I’ve asked the team about following up with this.

You’re correct that this is iOS only, I’ve suggested putting up an Android one. Stay tuned on if we do that.

Even though this tutorial covers an older app, it does a good job of explaining the cross-platform concepts. 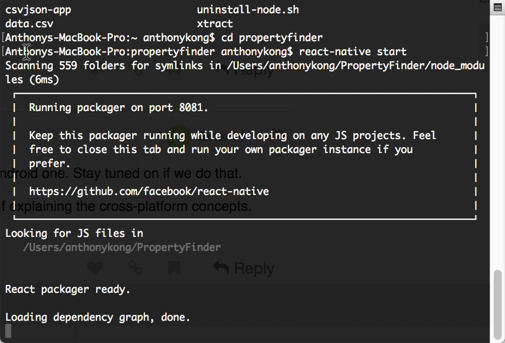 Hi Christine, I tried it again today. I noticed when I use react-native start, nothing loads up vs running in xcode?

The bundle file, which contains the React Native code, isn’t being generated it seems. I found this GitHub issue with a few options you can try although there seems to be many ways people end up getting this error.