Hey, I’ve been trying to download pygame from its website but none of the options have been working and I realised that the downloads are only meant for Mac OSX, but I have Mac OS Sierra. Is that maybe the problem? I don’t really understand anything about computers and I just need someone to help me. I’m trying to complete the “Beginning Game Programming for Teens with Python” tutorial.

Help would really be appreciated.
Daena

I am able to click on the link provided for the game (at end of the tutorial article) and download pygame on Sierra. Is it the download itself that seems to be failing or is something else going wrong? Maybe if you try again the download will work, it could have been a temporary problem.

Are you talking about the macports link? I haven’t really tried that one. When I try to download from pygame.org the download just keeps failing. It says " The package is incompatible with this version of macOS and may fail to install" Sorry, I am very slow when it comes to technology.

Use the link “Lion apple supplied python: pygame-1.9.2pre-py2.7-macosx10.7.mpkg.zip” at http://www.pygame.org/download.shtml download works without problems. Unpack the .zip in your download folder and if GateKeeper (is it the same name in macOS Sierra ?) brings up a warning, unlock it in “Systempreferences => Security => Default” (first tab, I don´t use a English system). I have not tried whether the install works complete but the installer let me choose the drive to install so, it should work. If nothing works, try out the hombre way as it provides the most recent package versions. 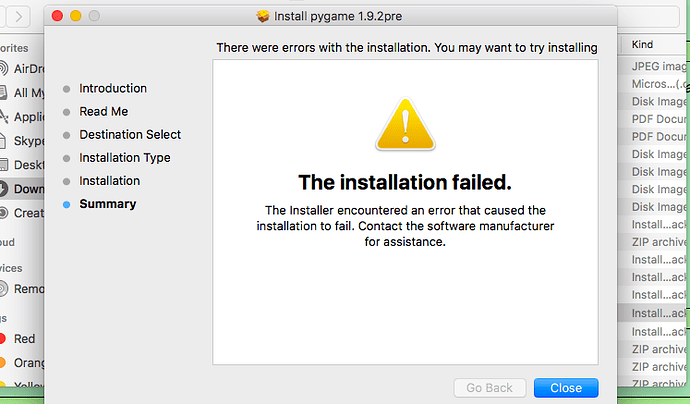 Then go the other way using homebrew the package manager.

If you have a recent macOS Sierra and Xcode, download from developer.apple.com the corresponding CLI (Command Line Interface) Tools version (for download you can use your existing Apple ID and payment is not needed). Relaunch Xcode for the license agreement thing which sometimes happened.

Open a Terminal “Launchpad => Utilities (or so) => Terminal” and run the first ruby command from http://brew.sh to install homebrew. Then follow http://pygame.org/wiki/MacCompile AND https://bitbucket.org/pygame/pygame/issues/82/homebrew-on-leopard-fails-to-install#comment-627494 as the installation looks broken.

I’ll give it a try later, thank you. Seems like a lot of effort. Enjoy your day.

Welcome. I give it also a try but I have no idea whether it works or not.

Cool cool, tell me if it works:thumbsup: