I’m coming to the important part of my app and I just wanted to see if my idea in terms of set up will work, or if there are any better ways from you iOS aficionados. As a very rough view my app will look something like this: 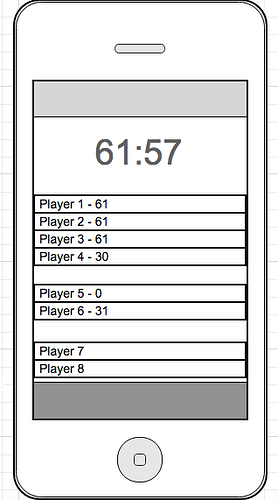 I planned to have obviously a timer for the overall game.

Then each player is listed. There is meant to be three sections in this table, it’s not overly clear admittedly from this moqup.

The first section would be players currently playing, their individual timers would be counting up.
The second section would be substitutes
and the final section of the table would be unavailable players. Maybe they are injured or something and can’t play.

My plan was to allow a user to drag a table cell over another table cell and the two cells would switch position. That would be symbolic of a player entering the field and one leaving.

So a couple of questions:

1 - I planned to start this final screen as a standard UIViewController, would that be right? I though I’d have several elements, like tables and timer stop/start buttons so that would be a better base to start with?
2 - In terms of dragging the cells, is this a viable option or would it be difficult to do? The cell would have the player’s name inside a label and also a secondary label that would be identifying how much a player has currently played in the current game.
3 - I suppose I would be dragging in a Table View element to create my list of players and attaching the datasource manually?

@jonny. Thanks very much for your question, and my apologies for the delayed response. From what I can tell, your screen honestly looks like a straight forward UITableViewController. The timer more than likely would be inside the header view, and the remainder of your table would contain sections. Each cell for the players appear to be simply utilizing the same custom cell, so that should be fairly easy to do also.

My advice is to make this screen as simple as possible, and make it work with the tools that Apple provides. Working within that realm makes it much, much easier to accomplish your goals.

I hope this helps!