In this tutorial, you create an app for the Six Flags Magic Mountain amusement park using the latest version of MapKit. If you're a roller coaster fan in the LA area, you'll be sure to appreciate this app :]

This is a companion discussion topic for the original entry at https://www.raywenderlich.com/2765-overlay-images-and-overlay-views-with-mapkit-tutorial
code March 14, 2016, 11:26am #2

I tried to paint the way on the map in my app as you did . And I get the coordinates directly from Google Maps , but when I put in the code the coordinates I took do not add up . How can I paint a street that exists on the map?

Mapkit doesn’t allow to say “highlight this road” on an Apple map.
It seems like you stumbled upon an inconsistency between Google maps and Apple maps

So there is no way to do it ? Thank you funkyboy

I don’t think so.
Step back: what doesn’t add up?

For example i get the road half of the coordinates on the street. And when I sent draw what came to me was what is in the Annex.

Do not let me do any more replay. We can talk on the other side? Thank you 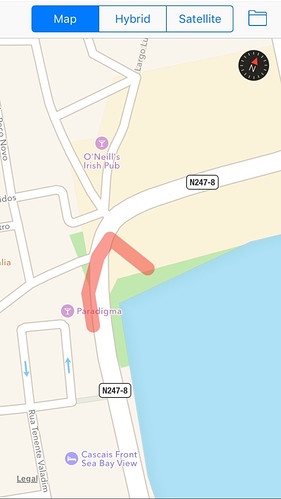 Ok, I see. But how are they off? Maybe there’s a mismatch in the zoom factor.
Is the shape similar to the one expected? Or totally different?
Once a colleague of mine screwed up by wrongly casting latitude and longitude