Had no idea where to post this. With all the books released from this site on mobile app development why is there no native mobile and Apple TV apps for your subscription video service?

I hate watching videos on iPad in the browser as auto play never works it’s very annoying. Clearly this site has the talent to make a mobile app for this subscription service…

Oh yeah! I too thought of the same, but then they are using Vimeo and even a native application, if built, won’t have downloadable videos / Offline mode

However, I am able to autoplay videos just fine in Safari(macOS) Try viewing the site in PC mode via iPad, and check if autoplay works!

I suppose I can try that however with this site originally primarily being Apple technology focused I shouldn’t have to do things like that. I mean I have been developing web apps for a very long time - this being one reason I dislike web tech consistency across browsers - and there are a apps that support native offline.

With the skills of the people here there is zero reason not to have a native mobile app for this. If Vimeo doesn’t support this they can always just use AWS for video streaming

. Offline viewing on a web browser I can understand the reason for not doing it as anyone can just steal the videos. Native apps don’t have as many limitations.

Stay tuned for an exciting announcement in the next month or so - I can’t say more yet, but I think you’ll be happy to see it. :]

Stay tuned for an exciting announcement in the next month or so - I can’t say more yet, but I think you’ll be happy to see it. :]

Also, another thing I’d love is the entire transcription (closed caption) of the lesson shown in the side of the video player, with parts highlighted as per the timestamp of video being played. Like in Lynda.

Does the app published?

Wow, Great work!
I am loving-hating the new update. I loved seeing all ~22 iOS Learning path videos in one page, however now it seems to have split up into quite a few paths.
Also, despite being on a paid plan, am unable to take videos offline via the application.

Also, despite being on a paid plan, am unable to take videos offline via the application.

Ah got it, need to upgrade to professional plan to get them videos offline

Also, a small thing seems to have been overseen - The hide lessons button doesn’t float.

Scenario - I am using a Mac mini with dual displays, one running a tutorial while I practice on another.
Because of safari’s stupid full screening option, I would be unable to use the second monitor because it goes blank when I full screen the video in first monitor. To counter that, I used the collapse lecture name in playlist option, which was earlier just above the video I am currently viewing.
Now, when I have maximised the lessons pane and want to hide it, I have to first scroll up till the start of lessons pane to minimise it, earlier I could do that without scrolling because the minimise lesson pane option was just above the video I used to watch. @rwenderlich can something be done about this?

Sorry that the new design doesn’t support the way you are used to using the site. We will take a look at this in some upcoming design reviews and consider making a change to make the show/hide easier to access at all times.

Personally , I think its poor show …

“Thank you for being a raywenderlich.com subscriber!, we worked out a way to get more money from you”. Not only we charging for content but we charge you on how you access it.

Unlike many others subscription services that dont charge you for downloading courses !

They have been fair

I could be completely wrong but I thought the price I paid for the full year before this pro plan was the same price as the new pro plan… if that is the case why would I have to pay to upgrade? Possibly they have lowered the original subscription price now but that doesn’t change the amount paid right?

I definitely wouldn’t pay again more just to have access to downloads I’ll keep the legacy plan which seems cheaper per month even compared to the price I paid for it originally. Kind of feels like a kick between the legs after the amount I have spent on products through this site up to now.

Could you post screenie of the plans page?
I guess you should be able to upgrade to the pro plan for free, try clicking that upgrade button

It’s not free the email I got said a 15% discount. But I bought the original by paying for the year.

Again, can you press upgrade and see how much it would cost to upgrade? Should show 0.00$ to upgrade… 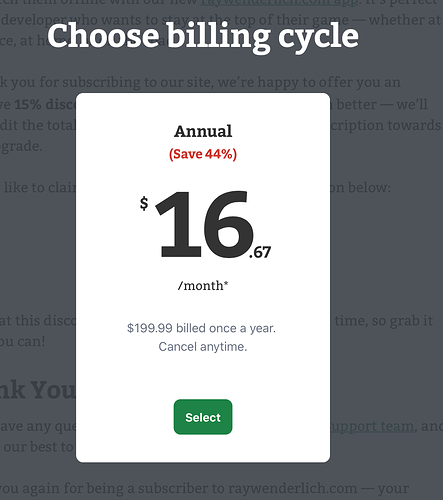 Where as legacy is half that price so I will stay where I am.