I am working on the Saving Locations Chapter of the MyLocations app, and get the error unexpectedly found nil , when I added the code setting the tab bar controller as the root in app Delegate, why is this happening and how can I solve this? 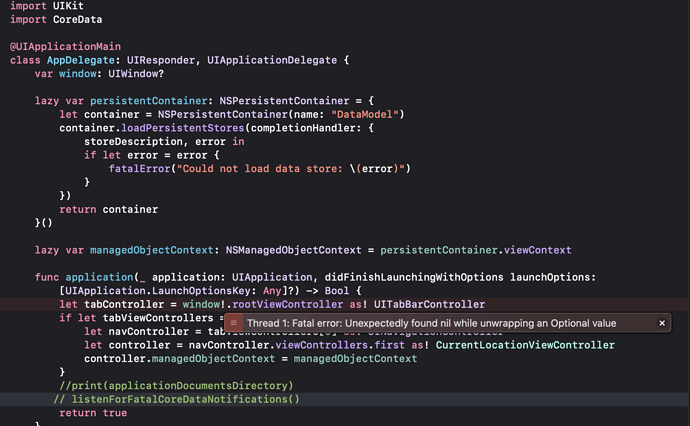 Hi @isaacballas2, looks like the tableview is returning nil and crashing because you are using forced unwrapping. One way to check this is by using a guard statement. In regards to a solution I would try changing the tabController constant to,
let tabController = mainStoryBoard.instantiateViewControllerWithIdentifier(“yourStoryboard”)
as! UITabBarController
self.window?.rootViewController = tabController

It won’t even compile, it says mainStoryboard is unknown identifier. I was following the direction in iOS Apprentice, was there a bug in the book

Without seeing your project, I can’t tell you for sure but it looks as if your root view controller might not be a tab view controller. Please compare your project against the final project for the chapter (specifically the storyboard) and see if both are set up the same way. Hopefully, that lets you figure out what is going on …

When I set up the project I set it up as a single page project, then implemented the tab bar on the storyboard… was that my mistake? can I fix it? how would I make the tab bar controller the root?

My suggestion would be to check in the storyboard and make sure that the arrow indicating rootVC (initial VC) is attached to a Tab Bar VC. It’s likely that you either don’t have the initial VC declared or that it’s pointing to a non-Tab Bar VC. Hence, the crash is happening either because there is no rootViewController or it can’t take the rootViewController and cast it as a UITabBarController.

I just checked, it is connected to tab bar, here is a screenshot, I have no clue why this is happening 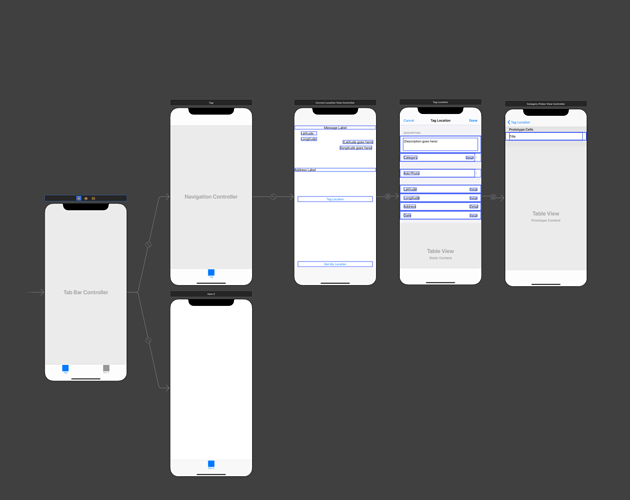 Two other suggestions then.

any solution to the above question ?

@filly Do you still have issues with this?

I encountered this problem as well. Is there any solutions to this problem? my situation is completely the same as @isaacballas2.

I might have found a solution in Matt Neuburg’s book “Programming iOS 13” and on Andre Bancroft’s page. He writes that as of iOS 13 the app is launched with window scene support, which alters the order of assignments and, most importantly, the call to (_:didFinishLaunchingWithOptions:). I’ll quote here:

“Exactly how UIApplicationMain proceeds depends on what it discovers as it gets going. New in iOS 13, your app can use scenes and scene-related classes and protocols (UISceneSession, UIScene, UIWindowScene, UIWindowSceneDelegate).”

As far as I understand the author and the steps he outlines in the launching process, in iOS 12 and older launching used to proceed as follows:

This would be all well and good for your code, as the root view controller already exists when (_:didFinishLaunchingWithOptions:) is called. However, in iOS 13 the order changes to the following:

Long story short, your code refers to something that does not exist at this point of time in the launching process. The fix would be to move your code over to the SceneDelegate's (_:willConnectTo:options:)method, which is called at the same point in time when (_:didFinishLaunchingWithOptions:) used to be called. Hope that helps.

@danielmey Thank you for sharing your solution - much appreciated! :]

Thank you for that good writeup.