You've learned much about using constraints in Interface Builder, now see how to interact with them in your code.

This is a companion discussion topic for the original entry at https://www.raywenderlich.com/3933-mastering-auto-layout/lessons/4
jisanson February 24, 2017, 6:29pm #2

Hi, thanks so much for the great video series!

Hi, thanks so much for the great video series!

It’s worth noting that in the demo project reinstalling constraints when rotations are occurred isn’t necessary.

It’s worth noting that in the demo project reinstalling constraints when rotations are occurred isn’t necessary.

Yeah, that seems to be right. I’m not sure why that’s in there, but I think in an earlier version of the code, it was doing some size-dependent calcs that aren’t in there anymore. Not until video 9 do we do something different with the size.

Thanks for pointing it out.

Is it considered ok to do some layout in IB and some in code? I can think of cases where it would be easier to do some layout in code rather than death by 1000 clicks trying to create it in IB, however I can also see where having layout in two places would get troublesome to keep up with. In Xcode, does preview show the layout from both IB and from code?

Absolutely! It’s often easiest to setup your layout in IB that handles the majority of your cases and then add some code to tweak for specific situations. Preview will NOT show the layout from code with one exception: if you create a custom view and make it IBDesignable, IB will run your code to determine how to display your custom view.

Very cool tutorial! A little over my head but made more sense after I could step back and digest each section of code. I can definitely see the advantages of combining both techniques. After years of doing layout in PS and Illustrator , IB is very comfortable and accommodating.

Now onto the challenge!

I think I’ll stick with the combo approach, much easier for my brain to absorb too!

In both the demo and the challenge we only set the aspect ratio of the UIImageViews instead of explicitly setting their height/width to constants.

By doing this, do we allow auto layout to compress or expand their intrinsic content size depending on the view bounds and the sum of their constraints?

Thanks! That clarifies it.

Thanks for excellent tutorial.

Unless I missed it, did you discuss why using a UIStackView would not be a better option to do the layout and spacing. Isn’t it the more preferred method rather than using layout guides?

Stack view is definitely one of the first tools I use for layout. There are definitely situations where it falls short or you have to use constraints in addition to stack view.

Hello, was looking for an answer, but starting to give up or need to have a good night of sleep.

Can anyone with experience tell me how to set this constraint programmatically? The issue I have is that I can’t set multiplier. From interface builder, it works perfectly. 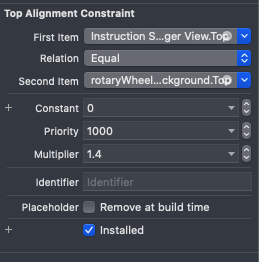 So, after sleep, finally, everything comes to place.

The problem was I was mixing constraint styles in a bad way. Was adding the last constraint like this fingerView.addConstraint(topConstraint) and had instead just made it isActive = true.

@vidocaz Glad you sorted it out! Cheers! :]