Audrey, what causes the spinner to appear?

I didn’t notice our doing any work to implement them. Are they built into one of the classes that we are using?

Attaching a Swift 5 Xcode 11 version of exercise files for this lecture, could probably help those who don’t have Xcode 10 to be able to run the demo. Did nothing but used the default migration tool, and can verify that the end product works just fine (albeit with 2-3 warnings)
Won’t mind if this is made downloadable directly from the lecture video page - http://f.cl.ly/items/0O201X2T3R0A310t3A2M/10_OperationsInPractice.zip

hi akashlal! overloading == inside the Equatable extension is certainly how it’s done in our tutorial.

I see “our tutorial” hyperlinked to https://www.raywenderlich.com/4018226-overloading-custom-operators-in-swift#toc-anchor-001, was that intentional?

Ah okay, got the reason for the linking now

Coming back to the question, attaching a screenshot of the downloaded code without any modification - The extension is empty (just conforms to Equatable)
While the == function hangs outside, and is neither in the struct nor in the extension; but just works! How? 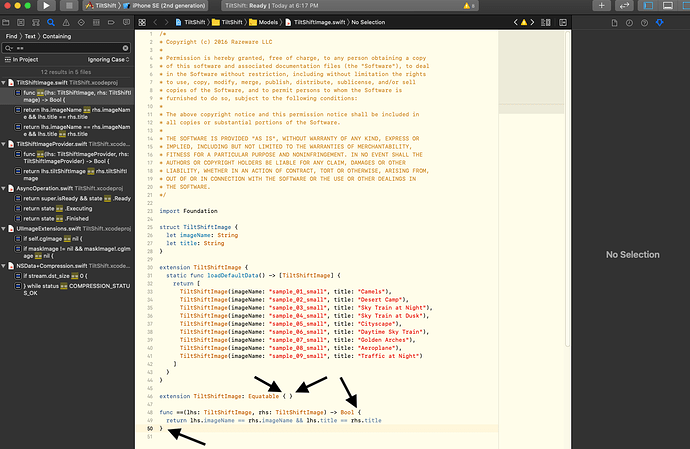 Swift allows global functions. But specifically for this case, I looked it up in our old Swift by Tutorials book (Swift 1.2 — the web page shows the wrong image and version info):

The extension is the usual way to declare conformance to a protocol, but notice that the == function is not inside the extension. You must declare all operator overloads at global scope because they aren’t methods that belong to a class – you can use the == operator on its own anywhere. They are only associated with a class in that the type of the two parameters are instances of the class the function is comparing.

This changed in a later version of Swift, so now the operator overloads are in the Equatable extension.

@akashlal Please check out the updated version of the course when you get a chance:

I hope it helps!