How To Make a Table View Drop-In Card Animation

A table view animations tutorial that shows you how to make a drop-in cards animation like in the Google+ app.

This is a companion discussion topic for the original entry at https://www.raywenderlich.com/2315-how-to-make-a-table-view-drop-in-card-animation
tsp August 31, 2016, 2:18pm #2

Here’s some code that reproduces the issue in your project.

Been banging my head on this for some time and no idea how to fix it.

Profiled the code, but it doesn’t seem to be a performance issue that’s causing the slow down.

I would like to ask you guys to update this tutorial. It’s relevant for a project I am working on since I want to use JSON and the members.swift is helpful in learning how to do that. However, I still want to be able to get it to run. I tried downloading the starter project and just building it, but it’s pretty old. I tried 2.3 swift and get these problems still. (I’m on XCode 8.1 with swift 3). I understand if you can’t or won’t but just making the request.

(I bought the iOS 10 by Tutorials book, and may see if there is something similar in there as well.
(Also bought the Unity book and am excited about jumping into that on my windows machine). 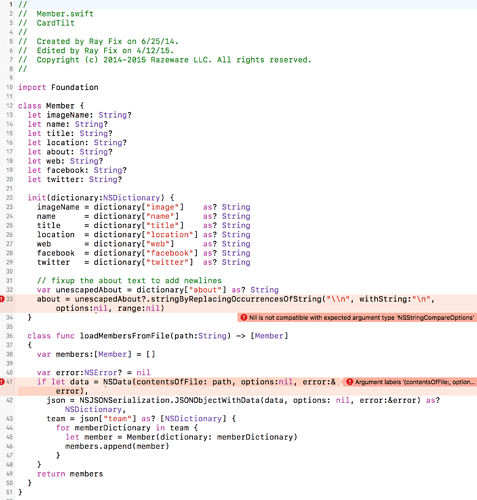 Hi there,
You can make the changes to the code to make it work in swift 2.3 Xcode 8.1. The NSData initializer and NSJSONSerialisation’s class method are marked “throws”. So we need to try those methods in a “do, catch” block. 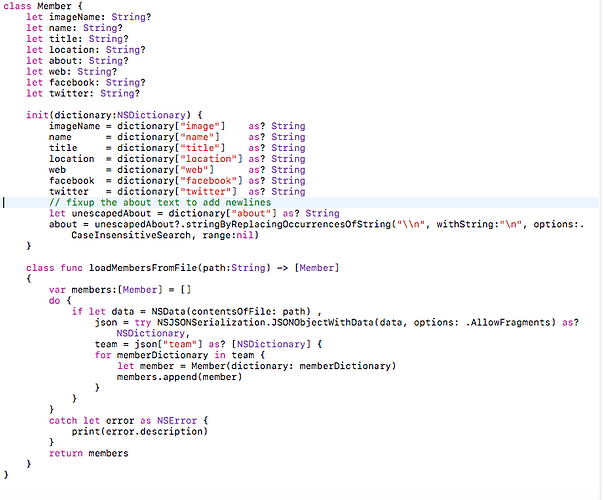 Hi, i just updated in swift 3.

Okay, I came back to this today as the cards intrigue me still, and seem to have it working in swift 3, but not with ajumal’s code. I’ve gotten a bit more experience since last post. I’d also add I changed the Build Settings for “Use Legacy Swift Language Version” to No, to force Swift 3 in the project.

Here are the relevant bits. There was one other function change that I accepted, forget the file, after using Edit, Convert, Convert to current swift syntax.

Here are the other bits (you’ll have to figure out that function when you choose the menu… sorry forgot to capture that it was not in Member.swift though.

Inside the init in Member.swift, swift 3 changes the function used to assign about:

Then shashank19909 basically had the other part that worked…