You don’t need to do low-level network programming in C. You can do it in Swift!

Available in the MacOS App store, “Etherdump Lite” decodes .pcap and .pcapng packet captures made with other tools (such as tcpdump or Wireshark). This version does not directly capture packets (per Mac App Store sandbox restrictions).

The full version, “Etherdump”, supports direct packet captures (assuming your user account has read-access to /dev/bpf*, see the help for details). The binary is notarized by Apple and free for download at https://networkmom.net/etherdump/

Etherdump and Etherdump Lite are implemented in Swift and SwiftUI. Source code is at https://github.com/darrellroot/Etherdump

PackageEtherCapture is a Swift package for MacOS which wraps the C PCAP libraries, allowing convenient capture of ethernet frames and network packets from a Swift MacOS Application (non-sandboxed). It vends a Frame hierarchical data structure with the network protocols decoded. https://github.com/darrellroot/PackageEtherCapture

At this time the following protocol decodes are supported:

Additional decodes are under active development. Warning: The Frame data structure vended by PackageEtherCapture is constantly changing, so develop against a specific package version rather than “latest version”. 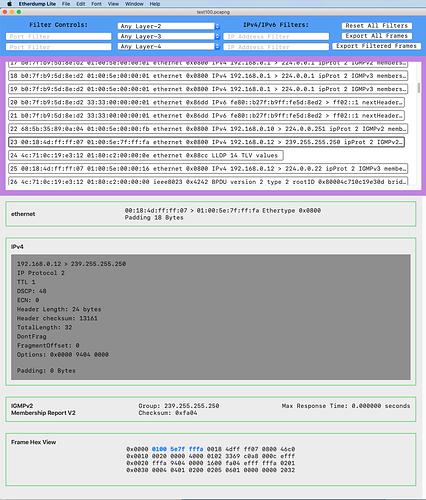 Thank you for sharing your projects @darrellr! Open source and having it in SwiftUI is awesome.