In this SwiftNIO tutorial you’ll learn how to utilize the helper types from SwiftNIO to create an API library that accesses the Star Wars API.

This is a companion discussion topic for the original entry at https://www.raywenderlich.com/4623672-creating-an-api-helper-library-for-swiftnio
isuru November 6, 2019, 10:53am #2

In the code snippet right above the ‘Extending the Models’ section, it’s missing the generic R.

Why doesn’t the code make use of keyDecodingStrategy to handle snake case, instead of doing the tiresome skinColor = "skin_color"?

Also, what’s with the use of _ as an instance var prefix? Why was it used? e.g. _homeworld.

Hey @isuru, thanks for mentioning this. I’ve updated the snippet in the article.

This means that instead of exposing a URL to our users in the homeworld property, we expose an EventLoopFuture<Planet>, which is more useful and clean, saving the end user from having to then go and fetch the actual Planet object. The _ itself does nothing here, it’s purely a convention picked up from Python where private properties are prefixed with _. I hope this answers your question, if not, feel free to let me know, happy to further explain :]

@tokopedia Thanks for mentioning this! The tutorial was updated a while ago, but I totally forgot to reply back here. Thanks for the ping @shogunkaramazov!

What should I do? 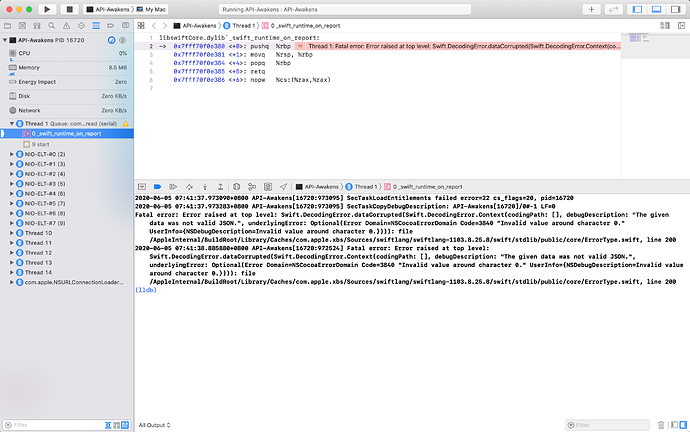 @acca Does this happen with the sample project too?

Yes, it still not work!

Thanks for raising @acca & @shogunkaramazov. I did some digging and turns out swapi.co (the service used in the tutorial) has been shut down. A new version of the SWAPI lives at swapi.dev. I will look into updating the project files & tutorial. For now to work around this you can edit the following line SwapiURLBuilder.swift:

Sorry for the confusion! :]

The tutorial & project files have been updated! Thanks again for noticing :]