I bought the 2d game apple game book. When I write source code I get compiler error but when I cut and past same code from PDF their is no error . Below is an image of what I’m seeing in my Xcode .
The first code has three errors
The one beneath it is the one I copied from book it has one error and when I delete my code it compiles . My question is they look identical why when I write it I get an error 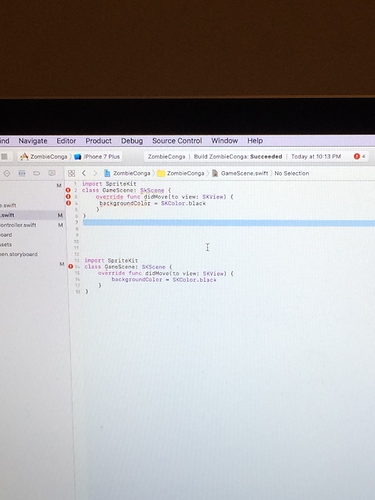 Looks like a simple typo: you just forgot to uppercase the ‘K’ in ‘SKScene’. If you read your first compiler error, I’m sure it’s trying to tell you just that–probably something along the lines of ‘SkScene’ being an unknown type. That, and the fact that SkScene is underlined in red, should have been a dead giveaway.

This was simple enough, but in the future it’s always best to post the errors/warnings you’re getting rather than just saying “I get errors”.