Hello.
I’m trying to use code from Chapter 9 in “Core Data by Tutorials 3.1”, but I don’t want my initial View Controller being the JournalListViewController. Instead, i want to have another view controller, in which I will be placing a button, that when tapped, will take me to the list-view.

If I try to set another initial view controller, I get the fatalError: “Application Storyboard mis-configured”. I see the error has to be in the AppDelegate.swift, but what should I do about that piece of code? This is the code I have in the AppDelegate:

Your AppDelegate is using a guard to ensure that the initial view controller in your app (as presently defined in your storyboard) is a UINavigationController, and its first view controller is a JournalListViewController. If this is not true your app will crash.

If you’ve changed your storyboard, you should change the conditions in this guard to match. What you change it to depends on how your app is structured though, so it’s difficult to give you specifics.

Yes, I understand that, but what is the code there for?

About the structure of my ‘Storyboard’, I only added another ViewController, set that new ‘ViewController’ as my ‘Initial View Controller’, added a button that when clicked takes me to the ‘Master Scene’. I also created a ‘UIViewController’ class for that new ViewController. See the attached picture if you are unsure what I mean.

Please reply if there is anything you’d like me to specify :)) 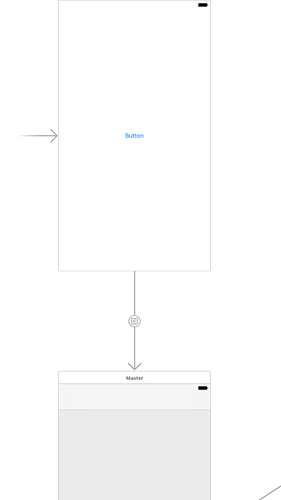 Why that code is there: I’m going to speculate that it’s there as a simple error-check for the developer. In the example, the listViewController needs a core data stack, but the AppDelegate’s reference to the view controller isn’t definite; it relies on the storyboard being configured correctly, and that returns an optional. You could write a line of code which would force-unwrap any optionals along the way, but if the storyboard isn’t configured correctly then all you’ll get in your Xcode console is something like ‘Force-unwrapped optional unexpectedly had a value of nil’. This way you get a descriptive error message.

Hmm, does this picture provide the needed information about the navigation controller?

Otherwise, just tell me what information you need… 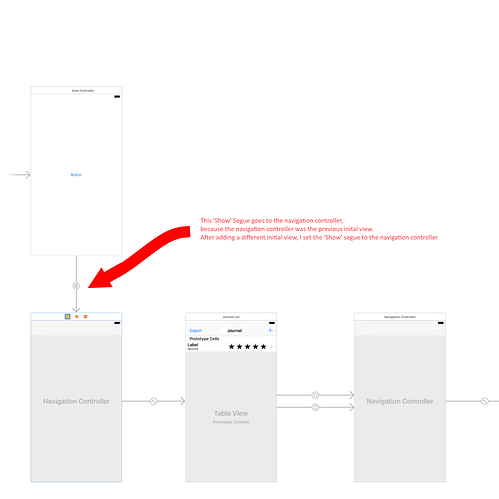 It doesn’t help me much yet; it’s not a conventional flow.

I’m not sure what your user experience is supposed to be from this diagram. And apart from the navigation controllers, I can’t tell if any view controller has a reference to any of the ones after it without seeing their code, so I don’t see a way for the app delegate to refer to any view controller other than the initial view controller.