Hello! Thank you for this amazing book, really enjoying it so far!
I’ve got a question though about this line of fragment shader in Chapter 5:

Why cone direction should be negated here? Aren’t both light and cone direction vectors originate from the same point? I guess it’s a silly question but I just can’t get my head around it.
Thanks!

It is confusing. Especially when we’re using position to calculate the direction.

Take a look at this picture, which I hope helps. 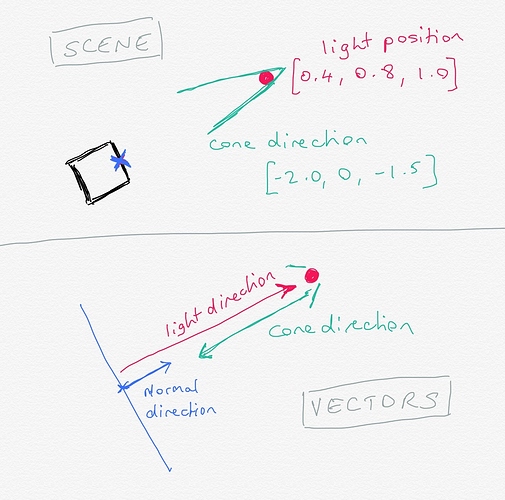 I would suggest taking a look at the results in the shader debugger and drawing quick diagrams like the one I just did, to see what the directions actually are.

Once you can visualise the direction vectors, you can use whichever vector directions and dot products make most sense to you.

Wow, thanks for this elaborated answer, it certainly helped a lot! Now I get it! Many thanks!

Hi
I have a related problem concerning Specular Reflection. The code, in chapter 5 is:

So specularIntensity is a number between 0 and 1 raised to the power of a large number (32 in the example given.

now it seems to me that a shinier material will give rise to greater specular intensity, but the more we raise the materialShininess number, the smaller will be the specularIntensity

Is this the effect we’re looking for?

The higher the shininess, the smaller the specular will be.

I’m not sure whether this guy uses quite the same math as I do, but he has some good diagrams:

Also, note that he says:

Scratch-a-pixel is also a good resource to know about:

The Phong Model, Introduction to the Concepts of Shader, Reflection Models...

Lesson summary: Introduction to reflection models, the Phong Model, the concept of shader and BRDF.

In this pic, n is the shininess:

Thank you. It’s very clear. The dot product of the normalised vectors is effectively the cos of the angle and the exponentiation’s job is to attenuate it.