Chapter 32: Window variable is now in Scene rather than app delegate file

I’m having the same problem and cannot more forward. I’ve tried replacing code from the finished project and it doesn’t correct the error. Also tried to delete the scenedelegate… Not sure what direction to take this one

The program builds successfully, but then crashes when nil is found.

If you deleted your scene delegate put it back to your project. Can’t find it in Bin? Create new single app project and copy it from there to your MyLocation project.

Now follow this steps to achieve same thing as shown in the book for AppDelegate.swift file.

And make sure that your Main storyboard view controller hierarchy looks like this: 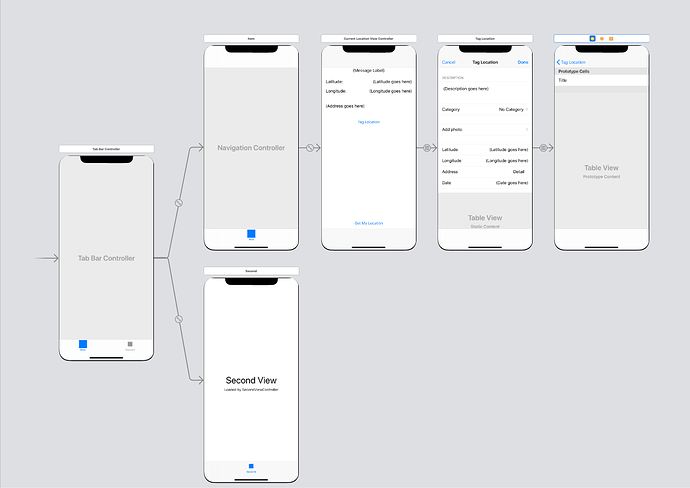 Thank you for helping me with this.
I added your changes from above and I now have 2 new errors -> both referencing the line
controller.managedObject = managedObjectContext

the error is -> value of type ‘CurrentLocationVC’ has no member ‘managedObject’

I still have the unexpectedly found ‘nil’ while upwrapping error.

I should have mentioned this earlier, but didn’t think it would make a difference. I abbreviate ViewController in my files as VC. I don’t do this for any Apple created VC’s (ie. UITableViewController). I started doing this a little while back because I think it makes the code cleaner and easier to read. Maybe this is the first time it could be the reason for my errors… Anyway, this VC abbreviation is only used for: CurrentLocationVC, LocationDetailsVC, and CategoryPickerVC

Okay, thank you again for trying to help.

Hello interactivexr,
Thank you looking into this. I looked again to find I was using managedObject instead of managedObjectContext. Changed it back and that fixed the additional error.

Still have the Thread 1: Fatal error: Unexpectedly found nil while unwrapping an Optional value error though.

My github is: https://github.com/razmanugget and I’ve pinned the iOS Apprentice book to the top.

did you manage to solve it? i just encountered the same error

No, I never resolved this issue. I’ve spent about 6 hours checking all the connections between storyboards and controllers and checking the code against the version in the book example which works fine.

When I drop the book example code in, it still gives me the “nil” error, so I am pretty sure I don’t have an error in my code. I think I missed hooking up something, but I can’t find it.

Finally I went on to the next lesson and had an error there too toward the end. I think the errors are most likely on my end (but maybe not), but I also think the book should be a little more clear about code changes which need to occur. For example, if there is new code or a code change, then it should always appear in its own box. Usually this is the case, but sometimes the code change is buried in a paragraph and you have to be reading carefully in order to not miss it.

the solution for scene delegate worked for me at that point, but in the next chapter it doesnt…
any other solution??

FIX:
To get your application working and get rid of Thread 1: Fatal error: Unexpectedly found nil while unwrapping an Optional value error just change application(_:didFinishLaunchingWithOptions:) method in AppDelegate.swift file to return true as it was in first place and remove window property because you don’t want to access it as explained above.

@saipurva can you be more specific at which point in next chapter your code stops working?

i got it solved. thank you

i figured it was a tiny error. that i guess it often happens while coding

Thank you again for trying to help me. New error with the line change to controller.manageObject = managedObjectContext

I already have return true in the func application didFinishLaunchingWithOptions… I’m just not following this. Sorry. I’ll try it again when the next book is released. Maybe it will be easier then

Your method application(_:didFinishLaunchingWithOptions:) should be like this and nothing else:

You can add persistentContainer and managedObjectContext variables back to AppDelegate in order for your saveContext() method to work.

I changed it to return true, then wiped out saveContext… and the app runs again, but without the save functionality. That’s fine. Let’s just leave it here. Thank you for all of your help

Hey are you guys planning to share an official fix to this? Is this caused by the new SceneDelegate.swift file?
Thanks for all your help!

This fix worked for me. Thank you for sharing!

@ganem Can you please help with this when you get a chance? Thank you - much appreciated! :]