I would like to be able to take advantage of the Checklists.xcodeproj files that have been provided for each section (this is a VERY NICE feature) but I’m running into a signing error that I cannot solve. I tried to replace the “com.razeware.Checklists” Bundle Identifier with my own and tried to use my own “Personal Team”, but nothing seems to work. Attached is a screenshot of the error. 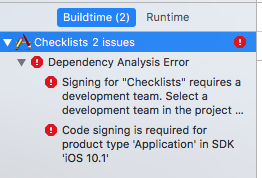 Bonus for helping with the above:
I’ve also been trying to keep track of items within the chapter. I’m only half-way through, but here is what I have so far. You don’t need to respond to all of these. They are for your benefit as you struggle to keep your book up-to-date with Xcode’s changes.

page 111 In the middle of the page it says:
“Go to the table view cell in the storyboard and in the Attributes inspector set its Accessory to Detail Disclosure”
It’s not specified if this instruction refers to the Add Item Scene or the Checklists Scene. Although it might seem unreasonable to think it refers to the Add Item Scene, that scene contains an item in the Document Outline called “Table View Cell” whereas the Checklists Scene does not: in it’s place there is “ChecklistItem” because that’s what it was renamed in the middle of page 20. Confusion would be avoided if the instructions specified that the Checklist Scene is meant, and that the item whose Accessory property is set to “Detail Disclosure” is called “ChecklistItem” rather than “table view cell”

There’s a related problem on page 113 where it says,
“Open the storyboard. Select the table view cell and Ctrl-drag to the Navigation Controller next door to make a segue”
First, it might be helpful to mention that the “table view cell” being referred to here has the label “ChecklistItem” in the Document Outline. Second, since there are 2 Navigation Controllers “next door” to the Checklists Scene, it might be specified that the one on the right is meant, although this is made clear later by the figure at the bottom of the page.

I spent a lot of time thinking I’d done something wrong because I didn’t see the Edit screen working correctly on pages 114 and 115. In retrospect, I now see that it’s not until p117 that the reader is explicitly told to run the app to see the new Edit function working.