after implementing part of code for chapter 9, where we introduce the camera, also after looking heavily into previous chapters, I have one question. what and how needs to be done, so that I can have the option… of either moving the camera, OR moving object within my scene. ( or applying any possible transform to the object, vertex, quad… whatever)

if I understand the code correctly… let’s just take simple quad… from it’s own object space, coordinates of its 4 vertices get transformed by all 3 matrices, including the camera view transform, so in the end effect I am rendering the quad AS SEEN by camera.

in uniforms… this transformation matrix is somehow stored and applied to ALL vertices at once (in shader.metal file ) but by changes in chapter 9 it seems to me, that the option has been lost to apply transform ( move, scale, rotate ) to only SINGLE object in the scene.

could you pls give me some insight to this?

many thanks in advance

I attach a project that is from the chapter, but just before adding the Orthographic camera. 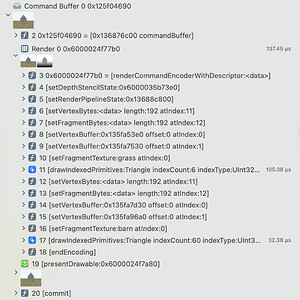 That is a screenshot of the GPU frame capture. It may be the missing link for you. The vertices aren’t all rendered at exactly the same time using the same buffers. There are multiple commands that set those different buffers at different times. Each of these commands is run sequentially on the GPU. The commands set the state of the GPU, so that the draw can be run parallel for all vertices using the same state. The draw is indeed parallel for all vertices, but only those vertices in the current vertex buffer.

You can see that there are two draw calls (at 11 and 17). One for the ground, and one for the house. The uniform buffer containing the projection, view and model matrix, is set before drawing each model (at 6 and 12). The vertex buffer for each model’s position is also set before the draw call (at 8 and 14).

During the draw call, the vertex function runs simultaneously on each vertex. First the ground’s vertices, then the house’s vertices. Before drawing each model’s vertices, the uniform vertex buffer is set at index 11, so each model thus has a different ultimate matrix.

This code shows that each of the objects has its own Transform.

When you run it, you’ll see the house slowly rise into the air, while the ground rotates around the y axis. The camera transform prints out in the debug console and doesn’t change until you use your mouse to move it.

thx a lot for the answer. as always, spot on. that random piece of explanation was exactly, what I was missing.

have to say… it is really a perfect book. it just takes time to digest it all

. And well done for pushing through!

My main advice would be to use GPU frame capture often to see what’s actually happening on the GPU. There’s so much information there.

yes… GPU frame capture is a very interesting part, it’s just not easy to learn it. and learn, how to use it effectively. is there any good tutorial on capture?

To be able to understand Apple’s Metal videos, you do need some background in Metal. I would guess after Chapter 16, GPU Compute, when you’ve been introduced to TBDR, you’ll be better equipped. But each time you watch them, you’ll understand a little bit more